Posted on September 15, 2018 by Christine Stevenson 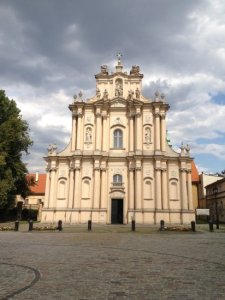 You can’t get away from Chopin in Warsaw. There’s no escape – from the moment you set foot in the Arrivals Hall of Warsaw Chopin Airport to walking the streets of the Old Town where there are Chopin benches (push the button for a quick blast of some music), and many advertisements for Chopin recitals here, there, and everywhere. Nor would a pianist wish to escape. Chopin is the reason why we are here.

So where to start? We began almost by accident, entering the first Baroque style church encountered on a walk near the Old Town. The Church of the Nuns of the Visitation escaped the devastation suffered by much of the city in WWII. Why is it significant? Because it was here that the fifteen year old Chopin played the organ each Sunday while a pupil at the Warsaw Lyceum. 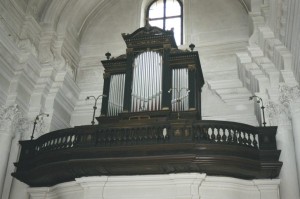 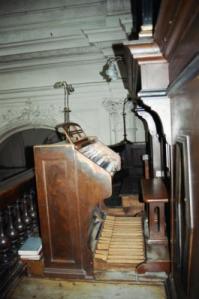 It’s easy to forget that Chopin was an organist as well as a pianist. When he and George Sand were forced to move to the abandoned monastery in Valdemossa on the island of Majorca during the winter of 1838-1839, they expected to find an organ in the chapel; but no. The Carthusian monks are a silent order. The beautiful chorale-like section in the central part of Scherzo No 3, composed in the monastery where a Pleyel piano eventually was transported, is perhaps a moment of wishful thinking.

After leaving the island, very ill,  Chopin convalesced in Barcelona; moving on to Marseilles, he played an arrangement of a Schubert lied on the organ at the funeral of the operatic tenor Adolphe Nourrit.

Think, too, of the bass line of Chopin’s famous ‘Funeral March’, played on the organ of La Madeleine in Paris at his own funeral. In the piano version, the LH intones a solemn B flat, D flat, B flat, D flat etc. Now imagine that transcribed for organ, played by feet on the pedalboard. Left foot on B flat, right foot on D flat, left, right, left, right …. and the posssibility of a physically inspired origin of this grim march becomes apparent.

Chopin’s love of fellow organist Bach’s music is well documented. A copy of the Preludes and Fugues for Clavier travelled with Chopin to Majorca. Chopin’s musical instruction at the Warsaw Conservatory included hours of lessons each week in counterpoint. The polyphonic episode in the 4th Ballade shows Chopin’s mastery of the technique.

Below – Chopin’s Funeral March, played on the organ.

This entry was posted in Uncategorized and tagged Chopin the organist, Warsaw. Bookmark the permalink.