The Incomparable Schubert : Sonata in A Minor D 784

Posted on April 28, 2015 by Christine Stevenson

Schubert.  How can I write about Schubert? How can anyone even begin to approach the sublime mystery which is Schubert? And where to start?

Let’s start with an image – Alfred Brendel at Schubert’s original grave – more about that in this previous post. 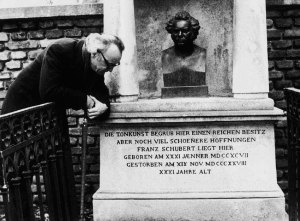 And let’s continue with a quote from Brendel’s book, A Pianist’s A-Z .

… ‘Schubert may well be the most astonishing phenomenon in musical history. The richness of what he accomplished in a life of merely thirty-one years defies comparison.’ Yes, the incomparable Schubert.

I’m currently performing Sonata in A minor, D 784. It was composed in February 1823 – a grim time in Schubert’s life; he has been hospitalised for the disease which would lead eventually to his death. In three movements, the Sonata opens, Allegro giusto, in the bleak key 0f A minor, pianissimo, with a stark, skeletal melody in octaves, pared down to the bare bones of a musical outline, and with a sombre, inexorable rhythmic tread. It ends with a falling minor 3rd in a two-note slur, a motive which will become increasingly important as the movement progresses, forming the accompaniment as the melody above it grows and expands.The dynamic gradually increases, and jagged dotted rhythms introduce defiance and anger before a modulation to E major brings us to the second subject. Schubert brings beauty out of despair in a steadily paced but lyrical section, wonderfully contoured.

The development explores ideas already heard, then a new thread is found – using dotted rhythms, but in a dance-like manner. The darkness of the opening returns at the recapitulation, the second subject now is in A major, and a coda finally affirms A major as the closing key, the falling minor third motive now triumphantly transformed into a major third. Hope? Light?

The second movement, Andante, in F major, seems innocuous and charming, until a brief motive, sordini, intensifies and turns the musical direction from F major through a foreign landscape of keys, arriving at last in the dominant key of C major for a reprise of the opening melody beneath a halo of quiet triplets. Listen out for the surprise modulation near the end, before the music is finally allowed to come to rest in the opening key.

The third movement, Allegro vivace, is like quicksilver, the hands chasing each other in a relay of triplets tossed between them. A dance-like second idea brings grace and elegance before the two hands take off again with the triplets, interspersed with precipitous arpeggios in contrary motion. We hear the dance again, and a magical modulation, before quiet triplets propel us into a return of the opening material. Tension builds before a flurry of unexpected octaves brings the Sonata to an aggressive conclusion.

This entry was posted in The Lunch that Never Happened, Uncategorized and tagged Alfred Brendel, Schubert, Sonata in A minor D784. Bookmark the permalink.

2 Responses to The Incomparable Schubert : Sonata in A Minor D 784