Posted on February 21, 2011 by Christine Stevenson 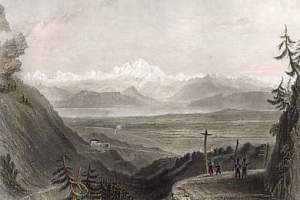 Vallée d’Obermann cannot be found on any map. It exists only in the imaginations of those who, like Liszt, have read Sénancour’s book Obermann, set in Switzerland, where Sénancour lived for some time.

Obermann is a solitary, melancholy character, who searches for a lonely valley in the Jura in which to live. “I have been seeking through all the valleys to acquire some isolated pasturage which will yet be easily accessible, moderately clement in temperature, pleasantly situated, watered by a stream, and within sound of a torrent or the waves of a lake… An obscure valley would be for me the sole habitable earth.” He is a man experiencing a dark night of the soul, tired of life. In the 1842 version of the piece, Liszt  marked the opening of the introduction lugubre, and the subsequent melody based on the opening’s three descending notes was marked avec un profond sentiment de tristesse. The 1855 version omits both the  introductory section and the French instructions; but there is no need for written directions – the music says it all, in one of the piano repertoire’s most lugubrious opening phrases.

This piece is the heart and soul of the Swiss Année, the longest in the volume, and one of Liszt’s finest works. Here the focus shifts from the panoramic to the profound, the deeply personal. There are quotes from Obermann to guide us: ‘Que veux-je? que suis-je? que demander à la nature?…’ and from Byron’s Childe Harold’s Pilgrimage:’…But as it is, I live and die unheard, With a most voiceless thought, sheathing it as a sword.’

Where to finish? In Geneva, amidst the bells of the city.

Les cloches de Genève is an atmospheric nocturne, dedicated to Liszt and Marie d’Agoult’s elder daughter Blandine, born there in

December 1835. The first version had the word cloche sometimes printed next to the descending, bell-like triadic figure which sounds throughout the piece, and featured the evocative chiming of bells striking the hour of nine; this was removed from the 1855 version, which was published when Blandine was nearly 20. By then, Liszt’s relationship with Marie was a thing of the past.

I must disappear for a few days while recording ; more anon, rejoining Liszt and Marie as they cross the Simplon Pass to Italy. Meanwhile, I leave the family of three amidst Geneva’s bells, with a performance by Lazar Berman, and with Byron’s words: ‘I live not in myself, but I become portion of that around me.’